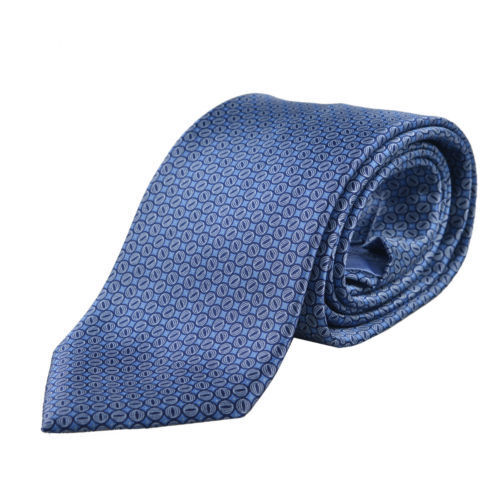 Brioni sells a variety of ties for men as part of several different collections for their menswear offerings. Mens Brioni ties come in a variety of designs, including geometric shapes, solid black, and floral patterns. Silk is the material of construction used for Brioni mens ties, which are made in Italy.

What kind of patterns are used in the designs?

The designs for the offerings vary. Some items in the Brioni suite feature geometric patterns with a solid-colored background while others feature stripes. Stripes offered range in style from having different shades of the primary color used to including a second color. Mens geometric designs offered have both one and multiple repeating designs that are on the entire tie. In the spaces between the geometric designs is a constant color that provides the background color.

What colors are solid styles available in?

Solid-colored Brioni items are available in several different colors. Among colors offered are silver, red, black, blue, and purple. In some cases, multiple items of different colors may be sold together as part of a package offering. In all cases, Brioni uses silk as the material of construction for the ties and makes the products in Italy. There is no variation in material or sourcing location based on color.

Yes, geometric and solid-colored designs are not the only offerings from Brioni. Several options exist that feature more than two colors in alternative designs. Some of these designs feature only two colors as well. Several options exist with floral designs on items that are not uniformly distributed through the item in a geometric fashion. In some cases, these designs can be bought as part of a package with a host of other mens styles.

Do ties feature the brands name?

Mens ties that are made by Brioni feature a brand label on the backside of the item, invisible to others when they are worn. In all cases, the Brioni logo is featured inside of a box written in a script. The space occupied by the label with the logo does not span the width of the item.

Are different lengths of ties offered?

Yes, different tie lengths are offered. Each item offered lists a size that defines both the width and the length of the offering. Sizing varies from item to item and is not correlated with the type of style that is listed. In addition to varying in length, there is some variation in the width of the item offered. Some mens ties are shorter than others are wider as well. There is not a general correlation among offerings between length and width. Sizing varies on an item-by-item basis.

Content provided for informational purposes only. eBay is not affiliated with or endorsed by Brioni.