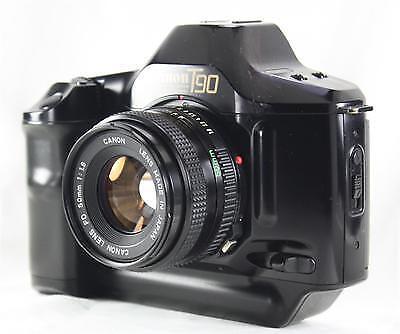 In February 1936, the Hansa Canon camera became the first camera released by Canon. Canon then proceeded to make hundreds of film camera models.

What are some different types of Canon film cameras?

What lenses do you need for Canon film cameras?

Canon uses three main systems of lenses. The easiest way to tell which will work on the unit is to look at the front of the camera body.

How can you tell when the unit was made?

If you look on the film chamber on cameras made after 1960, you will find a mixture of five to six numbers and letters in a series. Starting in 1960 through 1985, the first letter displays the year the unit was made starting from 1960. For example, an SLR camera made in 1965 would have a code starting with the letter E. The next number or two tells you what month the unit was made. Sometimes, the leading 0 for the months January through September is omitted. The last letter is a code for the facility the unit was made in. After 1985, the facility code was put first followed by the letter A, then the year and month codes.

Content provided for informational purposes only. eBay is not affiliated with or endorsed by Canon.