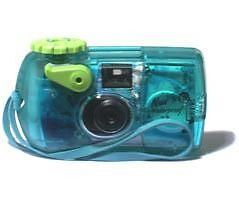 While the convenience and technical features of digital cameras allowed them to largely surpass film cameras, there are still some who prefer shooting with 35mm. Rather than capturing multiple images of the same shot, photographing with film requires you to slow down, think, and really compose the shot through the lens viewfinder, with a limited number of exposures on each film. Fujifilm is one camera manufacturer producing 35mm film cameras, with the option for compact point and shoot, digital single-lens reflex (SLR), and Fuji single-use cameras with flash.

What Are the Advantages of Shooting With Film?

There are advantages and disadvantages when it comes to both digital and 35mm cameras, but embracing one doesnt mean you cant also work with the other. One-time-use disposable cameras are a good introduction to get an idea of what it feels like to shoot pre-digital.

What Should You Look for When Buying a Film Camera?

Buying secondhand cameras is a good option if youre just getting into film photography and will allow you to play around with the different features on Fuji cameras or those of its competitors. However, there are a few things you should look out for and keep in mind before purchase.

Content provided for informational purposes only. eBay is not affiliated with or endorsed by Fujifilm.