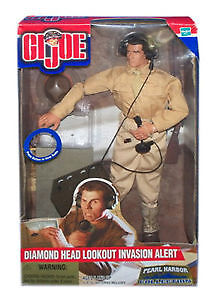 Hasbro has sold the G.I. Joe toy line for decades, and a lot of this success is owed to the heros never-ending battle with the forces of Cobra. G.I. Joe figures, vehicles, and playsets have persisted for generations along with their storylines. Hasbro has created over 500 Joe and Cobra figures.

What Are Some G.I. Joe Figures to Look For?

You can find G.I. Joe action figures of the heroes, such as Duke, Snake Eyes, Scarlett, and others. There is an ample choice of variations of the villains Cobra Commander, Destro, Zartan, Major Bludd, and more.There are also figure sets. Some may feature two characters along with accessories or a comic book, while others come with a stand for the figure for display purposes. Each figure has a signature vehicle, and some playsets come with a vehicle as well as toy figures to create a display diorama.

Why Do Some Action Figures Have Different Names?

Hasbro either failed to renew or chose not to renew the copyright on many G.I. Joe figure names, which resulted in several Joe and Cobra action figures changing names throughout the years. For example, Baroness and General Hawk would each have the names of their figures change to Chameleon and General Tomahawk, respectively. Double-check listings on eBay for rare editions that came before and after these changes.

When Did Hasbro Release the G.I. Joe Action Figure Line?

Hasbro released G.I. Joe as a series of 12-inch toy figures just over a month ahead of the post-Thanksgiving shopping rushes of 1964. The company believed that boys would never play with a toy that was named a doll, and thus dubbed the toys action figures. These toys sold for the first 12 years largely unaltered, with only minor changes and additions in 1969. After a short production halt in 1978, Hasbro would end up rebooting the line as G.I. Joe: A Real American Hero in the year 1982. These 3 3/4-inch figures would launch along with a comic and cartoon that would flesh out the Joe world with new Joes, the villainous Cobra, and their deep history of conflict.

How Did Hasbro Market Differently with G.I. Joe Figures?

The early toy market in the 60s didnt capture the attention of boys until the Joe series was launched. Each Joe represented a branch of the U.S. military and allowed young boys to create their own adventures, with the only boundaries being their imaginations. In adventures, all heroes need villains to battle against. Consequently, the Joe line would soon have an enemy to battle with the introduction of Cobra figures in the early 80s. Hasbro has refreshed the toy line after each series, adding everything from realistic hair and vehicle lines to Cobra soldiers with complex articulation.Hasbro has also fleshed out the storylines of the characters as well, and in the 00s, the brand released figures alongside animated movies that brought the stories of the characters, such as Cobra, to life.

Content provided for informational purposes only. eBay is not affiliated with or endorsed by Hasbro.