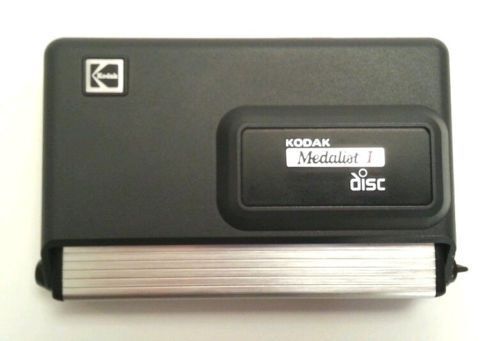 Kodak vintage disc cameras were introduced in1982 and were designed so that more people, even novice photographers, could take great still photographs. They were automated for ease of use.

What types of Kodak vintage disc cameras are available?

There is a nice selection of Kodak disc cameras available along with accessories and other memorabilia related to them. There are several different popular models available including 3100, 3600, 4000, 4100, 6000, 6100, 8000, and more. Some items include instructions, film cartridges, and other peripherals and accessories.

How were the new cameras different from older models?

When Kodak released the first of these units, they were very different from what consumers had seen before. The film was mounted on discs that held only 15 shots as opposed to the roll-style film that people were accustomed to using. The film was inside a cartridge and devised in such a way that the user couldnt load the film incorrectly. Because of the thin cartridge size, the cameras themselves were also thin. The film size was different at 10 by 8 mm, which was less than half of the 110 size.

Additional features began to emerge like onboard lens covers, lens switches for close-ups, alarms, and timers. They were self-contained items and couldnt be expanded upon. The cartridges also had an onboard dark slide to protect the film from stray light when it was removed from the camera.

How did the disc cameras automate photography for the user?

When they were first released, Kodak reported that all the user needed to do was select their subject, focus on it in the viewfinder, then press the shutter release. The innovative new cameras did a lot of work for the user in ways that hadnt been seen before.

The shorter focal length, only about 12 1/2 mm, put everything four feet away and beyond in focus at the widest aperture of the cameras lens. With that done, the user didnt have to worry about focusing the camera for each shot they took, as it was done for them. And it improved the quality of the printed photographs.

The cameras also offered a flash that turned itself on automatically when there wasnt adequate light. Since many shots could be wasted by the user not remembering to turn their flash on in darker settings, it offered economy and convenience. The flash also provided enough light to expose negatives for up to 18 feet. The shutter speeds were limited to 1/100 and 1/200, which reduced the chance of blurring when the subject or camera moved. The cameras also featured a tiny motor winder that advanced the film to the next unused frame after each shot.

Content provided for informational purposes only. eBay is not affiliated with or endorsed by Kodak.