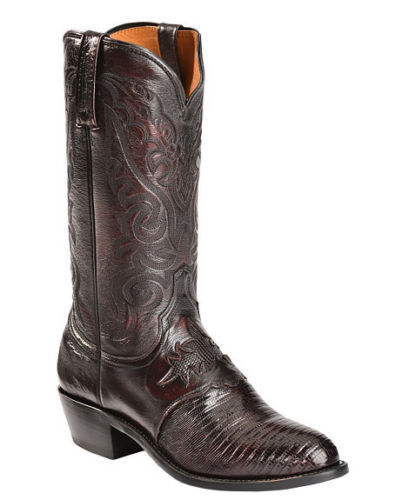 Lucchese is a brand of cowboy boots that was founded by Salvatore Lucchese, the son of an Italian boot maker. In the 1880s, Salvatore and his brother moved to San Antonio to set up a boot making shop. Today, the Lucchese brand offers cowboy boots using several types of leather.

What types of cowboy boots does Lucchese make?

This varies according to season, tastes, trends, and demand. However, there are several types of Lucchese cowboy boots that seem to reappear consistently. They are western boots and roper boots, which are the two main types of cowboy boots.

Are ropers and western the only types of Lucchese boots?

Periodically, new types and styles enter the Lucchese repertoire. You may find variations on cowboy boots, such as boots for polo, performance equestrians, and general horsemen. These are all types of riding boots with differing shaft heights, square toes, round toes, and a variety of heel shapes.

Are all the boots leather?

Lucchese manufactures a series of boots seasonally in alternative materials called exotic leathers and flat leathers. "Exotic leather" is a blanket term for skins derived from a variety of exotic animals, such as ostrich, gator, crocodile, pirarucu, shark, lizard, alligator, hippo, python, and rattlesnake. "Flat" denotes a leather-like material, or tanned skin, derived from an animal other than cattle, although flat may encompass boots or products consisting of calfskin. Goat, baby buffalo, and sheep are commonly called flat leather as well.

What widths do Lucchese boots come in?

The company offers styles in all widths, from narrow to extra wide. According to standard shoe widths, the letters "C" and "B" indicate narrow widths. "D" and "M" are medium widths. "E" and "W" are wide widths, and "EE" boots are extra wide. Bear in mind that not all Lucchese boots are available in all widths. Medium widths are more common, but there are plenty of narrow, wide, and extra wide boots from which to choose.

What is Lucchese Goodyear welt construction?

Content provided for informational purposes only. eBay is not affiliated with or endorsed by Lucchese.