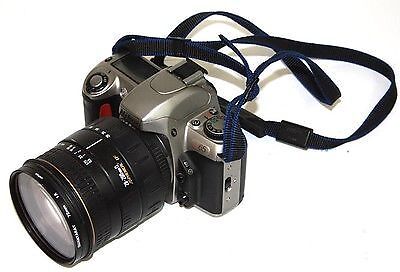 You can still buy film for cameras and get it developed at the drug store. You can use a Nikon film camera available on eBay to take your pictures your way. You can set the F-stops and other settings on the camera to your preferences.

Whatu001as the difference between the Nikon FM and FM2 cameras?What are some other features of Nikon FM camera?

The built-in LED lights in the viewfinder are the light meter. You can use the lights to assure that you have enough light for a standard picture. On the other hand, you can also ignore them and go for that u001aartsyu001a look. The beauty of the Nikon FM series cameras is that you determine how the photo looks.

True, you must have your film developed before you can edit the photos. However, your editing options are greater because the Nikon FM film camera shoots at a higher DPI than most digital cameras. This feature is very helpful if you decide to print your photo as a large, poster-sized print. The edges of the pixels maintain their clarity and are not likely to blur. Sharper, crisper pixels make for beautiful pictures.

What are some of the features of the Nikon FM?

The Nikon FM film cameras struck a balance between amateur and professional photography, making it easier to shoot professional looking photographs. The clean body design and almost intuitive feel of the Nikon FM camera make it a great choice for "almost professional" amateurs.

With a Nikon FM camera, you set the exposure, you set the lighting and you set the depth of field. You also manually advance the film and shoot double exposures. There is symmetry to taking pictures with a camera that doesnu001at do your thinking for you. If you want to focus on the flower in the foreground and have the background blurred, you can do that. Nikon film cameras allow the user to personalize their photos by selecting the settings to the useru001as liking. Although not designated as such, the FM is the first model, so you may see it as u001aFM 1.u001a

Content provided for informational purposes only. eBay is not affiliated with or endorsed by Nikon.